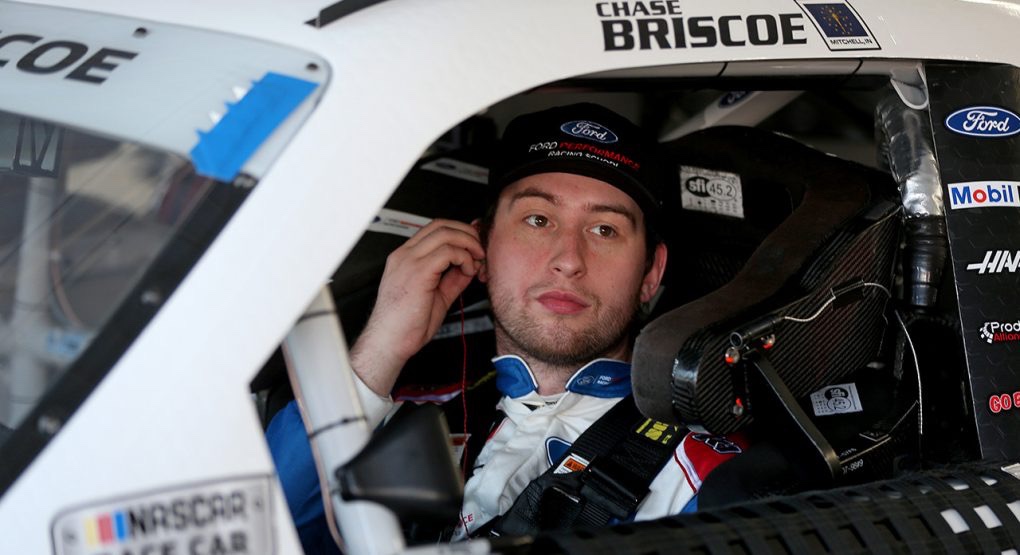 The first time the NASCAR Xfinity Series races the Indianapolis Motor Speedway road course would see Indiana native Chase Briscoe take a trip to victory lane in the Pennzoil 150. The win is Briscoe’s fifth of the season.

Scott Dixon, winner of the IndyCar event held at the track, gave the command to fire engines.

Austin Cindric started the day in tenth but needed just five laps to get to the front of the field passing Justin Allgaier for the lead. Meanwhile AJ Allmendinger who started 30th was working his way up through the field as pole sitter Jeb Burton found himself going in the opposite direction.

Mike Wallace who has not competed in a event in five years also completed in the event. He finished 24th on the day.

One driver who has an early issue was Anthony Alfredo who had his window net fall down. Alfredo would lose a lap with the unscheduled pit stop. Preston Pardus and Josh Williams both found themselves going off course early as Burton dealt with steering issues.

Vinnie Miller would lose a right front tire in the closing laps of the first stage. Allmendinger attempted you get into pit road before the caution came out but did so when the pits were closed resulting in a end of line penalty.

Cindric would claim the first stage as pit stops mixed up the field allowing Briscoe to lead early in stage two. On lap 26 Bayley Currey brought out the second caution after going off course.

On the ensuing restart Cindric would be penalized for jumping the start forcing him to do a drive through penalty. Brandon Jones brought out the third caution on lap 35 as his car caught on fire after Jones had reported a brake issue. After pit stops Briscoe made shirt work of those who did not pit and went onto win the second stage. Allmendinger and Cindric would move to within striking distance of the lead on the restart. With 14 to go Allmendinger moved up to second ahead of Allgaier and Cindric.

Tommy Joe Martins would an axel and bring out a caution with six to go bringing all the leaders and most of the field to pit road. Pardus would be shown as the leader with Briscoe, Allmendinger and Cindric lining up fifth, sixth and seventh.

Briscoe would jump to the lead in turn one of the restart but Allmendinger would give chase while Cindric was hung up in traffic. Woth four to go Briscoe mistook a turn losing the lead and falling to third. Briscoe would make his way back to the front after tight racing between Cindric and Allmendinger. 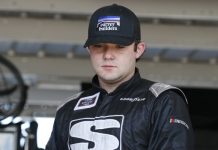 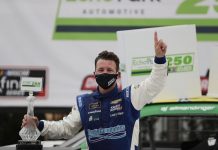 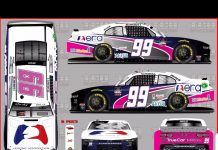