Jimmie Johnson hoped to start the 2012 NASCAR Chase off win a win at Chicagoland Speedway, a track he had never won at. Despite leading a race high 171 laps he was unable to do so. Brad Keselowski rallied back on the final pitstop to pass Johnson and pull away.

This is the fourth win of the season for Keselowski and his career win.Kasey Kahne, Kyle Busch and Ryan Newman rounded out the top five.

Jeff Gordon saw his title hopes take a huge hit when his throttle hung and his car slammed into the wall. He finished 35th on the day. Matt Kenseth suffered a broken shock midway though the race and was a non factor.  Denny Hamlin who entered the race with the points lead faded at the end of the race and finished 16th. 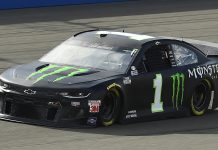